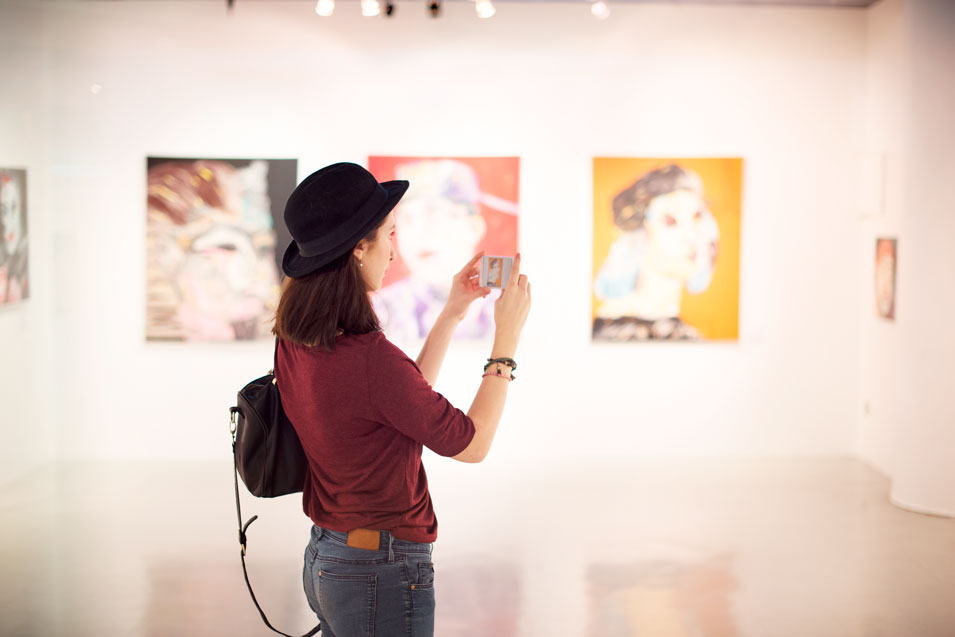 From New York to São Paulo to Singapore, these world-class design museum institutions will give you enough inspiration for a lifetime.

Design museums can be a fantastic source of inspiration, and the great cities of the world are packed with incredible examples to get your creative juices flowing. And museums don’t have to be exclusively dedicated to design to be useful for designers. Whether it’s a collection of conceptual art or vintage posters that sparks a fresh idea, a series of events or workshops that bring the local creative community together, or even the architecture (after all, many museums are famous buildings in themselves). In this article we’ve gathered together the best design museum collection featuring institutions from around the world. How many have you visited?

New York’s Museum of Modern Art (aka MoMA) boasts a prominent collection that encompasses art, design, architecture, sculpture, photography, illustration and more. Exhibitions at the design museum have covered topics such as 50 years of Helvetica, contemporary Dutch design and the Bauhaus movement. Stephan Thiel, interface designer for Berlin-based Studio Nand, is a big fan of the museum, which is located in midtown Manhattan. “MoMa’s senior curator Paola Antonelli does some excellent work curating design shows, and positioning the museum as an ‘R&D department of society’ as she puts it,” he says.

As an American institution, the Smithsonian is vast, comprising no fewer than 19 museums in total, two of which are in NYC. As the National Design Museum, the Cooper–Hewitt is the only one in the United States dedicated to historical and contemporary design, and the home of the National Design Awards. Reopened after a major refurbishment, the Cooper-Hewitt mansion is currently home to a number of exhibitions including Process Lab: Citizen Design – an installation built to give visitors first-hand experiences with the activities designers use to solve problems and develop new ideas – and a collection looking at the history of radio.

Currently hosting an exhibition exploring how the natural world has increasingly become a source of design innovation, the Design Exchange is Canada’s most important design museum. Based in downtown Toronto in the city’s old Stock Exchange, its rich program of events included graphic designer Stefan Sagmeister’s The Happy Show in 2013. Vanessa Eckstein, creative director of Toronto-based Blok Design, recently participated in a series of talks on the topic of happiness: “To have the DX, where these lighter and deeper conversations can happen around design in everyday life in our city, is a true luxury,” she enthuses. Permanent collections span over five decades of industrial design, including furniture, textiles and electronics.

Based in the Australian capital of Canberra, in between the rather more established creative hubs of Sydney and Melbourne, the Gallery of Australian Design (GAD) hosts design events of national significance, which in 2011 included a major exhibition as part of the Australian Graphic Design Association (AGDA)’s poster biennale. GAD design museum has run initiatives such as Remedy – a showcase of promising graduates in architecture, graphic design, industrial design and more – and also Young.Hot.Canberra, which elevates the city’s exciting homegrown talent.

Built in 1948, Brazil’s most significant design museum is modelled on MoMA in New York, and even sports a similar acronym: MAM. “Some important exhibitions and biennials happen there,” reports São Paulo-based graphic designer Cristiano Siqueira. Most of the collections centre on the work of Brazilian artists from the mid-20th century onwards, and MAM also manages a well-stocked design library. “It’s a quiet and beautiful place,” smiles Siqueira. In 2013, the museum collaborated with the Centre Pompidou in Paris on Crossed Circuits, which explored the fascinating relationship between styles and cultures on different sides of the Atlantic.

Although it was only founded in 1989, London’s Design Museum – recently moved from the banks of the Thames to a new home in Kensington – has built a global reputation for its inspiring collections, which span all kinds of modern design. This includes product/industrial design, fashion, architecture and of course graphic design. Past exhibitions have been dedicated to iconic figures such as Wim Crouwel, Terence Conran, Paul Smith, Alan Aldridge and Alan Fletcher. The museum also runs its annual Brit Insurance Designs of the Year competition to reward the most innovative and game-changing examples of design from the past 12 months.

The world’s largest design museum of decorative arts and design, the V&A was founded in 1852 in honour of Queen Victoria and Prince Albert. The millions of items in its permanent collections span 5,000 years of art, while temporary exhibitions have covered illustration, sculpture, photography and more – with recent shows dedicated to David Bowie and 1980s London fashion. “I like how UK museums like this function as a hub for exchange,” enthuses Studio Nand’s Stephan Thiel. “The V&A’s recent Arduino workshop for children is a particularly great example.”

The Bauhaus Archive design museum boasts an incredible piece of architecture in its own right – fittingly designed by Walter Gropius, founder of the hugely influential Bauhaus school of architecture, art and design. Within its holdings are inspirational examples from all of the above fields and more, including paintings, drawings, sculptures and models. A recent exhibition focused on the influence of the Frankfurt Art School and its relationship with the Bauhaus, while its current major exhibition, Bauhaus in Motion, offers you the opportunity to see some of the highlights of its collection before the museum is closed for construction work in 2018.

Although Stephan Thiel at Studio Nand laments that the level of engagement with the public through programmes and participatory events in German museums isn’t quite on a par with the likes of MoMA or the V&A, he believes Vitra and the aforementioned Bauhaus Archive do his country proud as “a place for exchange, hands-on exploration and curated shows”. Vitra is housed in a strikingly modern Frank Gehry-designed building that opened just days before the Berlin Wall fell, in Weil am Rhein, a German town on the border between France, Germany and Switzerland. The musueum largely focuses on product design, but temporary exhibitions have to-date included everything from architecture and sculpture to topics such as pop art, contemporary Dutch design and the art of reduction.

Finland’s Design Museum is one of the oldest of its kind in the world (although predated by London’s V&A). Its vast collection takes in industrial design, fashion and graphic design, and includes 75,000 objects, 45,000 drawings and 125,000 images. Besides holding (and touring) exhibitions on design history and other relevant topics, the museum also conducts research into Finnish design. It’s currently celebrating the centenary of Finnish independence with a completely renewed collections exhibition entitled Utopia Now – The Story of Finnish Design, focusing on the integral role of design in the evolution of the Finnish welfare state, with five themes illustrating the history of design through living stories.

“When I am looking for inspiration I tend to avoid design museums: it’s like being a chocolate addict swimming in a bowl of chocolate,” grins Liza Enebeis, creative director at Rotterdam-based Studio Dumbar. “I need to keep some distance, or I’ll drown in it.” Nevertheless, Enebeis can pick out one particular favourite in her native Netherlands: the Stedelijk Museum in Amsterdam, founded in 1874 but with a striking new modern wing opened in 2012. “Placing design in a museum context and then next to a contemporary art collection makes you look at a design with a different perspective,” she argues. “The clash or marriage is equally reflected in the building itself. These contrasts make it very inspiring for me.”

Founded in 1890, Denmark’s largest design museum spans applied arts across the country and Scandinavia in general. Of particular interest to graphic designers will be its standing collections of designs for labels, packaging, record sleeves and book jackets, as well as an impressive collection of poster art, covering commercial, political and more entertainment-focused applications for film, theatre and more. The museum is currently running an exhibition entitled Danish Design Now, representing a selection of contemporary Danish design across the entire spectrum: furniture, product design, graphic design, fashion, and design in the public space.

13. Museum of the Image, Breda

Based in Breda, The Netherlands, the Museum of the Image (MOTI) was formerly known as the Graphic Design Museum, but has since broadened its horizons to become “the leading authority on visual culture”, encompassing film, design, photography, fashion, visual arts, architecture, science and gaming too. Its permanent installation, entitled 100 Years of Dutch Graphic Design, is supplemented by a range of temporary and touring exhibitions, which recently included Couture Graphique – looking at the middle ground between fashion and graphic design. Past topics have covered branding, typography and all other aspects of graphic communication.

It goes without saying that the French capital has more than its fair share of incredible art and design museum buildings where designers can soak up inspiration – the Musée des Arts Décoratifs and Galerie Design Museum being two such examples, covering applied art (from textiles to advertising) and industrial design respectively. But there are few better places than the Musée National d’Art Moderne, part of the Centre Pompidou complex in all its ultra-modern architectural splendour. With almost 100,000 items in total, its collection of modern and contemporary art is second only to MoMA in New York.

According to Felix Ng, creative director at local design studio Anonymous, Singapore’s brand new ArtScience Museum is a real source of creative inspiration. Designed by Moshe Safdie, the design museum opened in early 2011 and is shaped like a lotus flower. “Its architecture is already an iconic Singapore landmark,” explains Ng, who draws attention to a recent Essential Eames retrospective as a particular highlight. “It has huge potential to curate more successful design-centred exhibitions,” he adds.

Bradford might not be the first place that comes to mind when you think of design, but the UNESCO City of Film is the place to go for a visit to what aims to be the best museum in the world for inspiring people to learn about, engage with and create media. Originally known as the National Muesum of Photography, Film and Television, the now more snappily titled National Media Museum is home over 3.5 million items of historical significance, and looks after the National Photography, National Cinematography, National Television and National New Media Collections. The museum features eight floors of permanent exhibits and temporary exhibitions, as well as the UK’s first IMAX theatre and two other cinemas showing a varied film programme.

The work of iconic Swiss artist HR Giger, who passed away in 2014, lives on at his very own museum. The HR Giger Museum came about after Giger held a 1990 retrospective of his work at the Château de Gruyères in Switzerland, and fell in love with the region. A few years later he bought the Château St. Germain in Gruyères and opened the HR Giger Museum there in 1998. It features an extensive collection of his artwork from different creative periods, including most of his film designs. And if you fancy a drink while you’re there, it’s also home to a Giger Bar, themed and modelled in his trademark biomechanical style.

Part of the Zurich University of the Arts, the Museum of Design in Zurich features four extensive collections centred around posters, graphics, design and applied art. Since 1875 it’s been collecting posters, graphic design and objects that represent both day-to-day design and more high-end design culture. it recently opened a new location, the Schaudepot, in the west of Zurich, where it holds all its collections under one roof. The museum also has its own eMuseum where you can browse its exhibits online, so if you can’t get to Zurich to see the current exhibition of Wolfgang Weingart’s groundbreaking modern typography.